Notice of Elections - Nominations for President and Director Due July 1, 2012

This year’s election will be unlike any held previously by the Federal Association. Changes to our bylaws will bring a new dynamic to the process and new logistics to the nomination and election cycles. The section of the bylaws governing elections is “Article VI Meetings and Elections.”; a copy of the bylaws is available on the Association’s website.

The process starts earlier and allows for a run-off vote – if candidates do not receive the required majority of votes. The first ballot will be mailed by August 1st and a run-off ballot, if needed, by September 1st. To take office, a candidate must receive at least 51% of the cast vote. The election for President and Director allow for multiple candidates without a specific recommendation by the nominating committee, although incumbents running for a second term will be so identified.

Candidates self-nominate if they want to run. Nomination forms and letter from members nominating other members will not be considered. Members interested in running for President or Director should complete a Nomination Form and return it to the office on or before July 1, 2012. Click here to open the form.

Previously, the Board provided the members and the nominating committee guidelines for selecting suitable candidates. A copy of the “Board of Directors’ Resolution on Qualifications for Holding Office in the Federal Association” and the “Nomination Form – Officers and Directors” will be mailed to all members along with other election information. The Nominating Committee will use these guidelines to select qualified candidates for the ballot.

While campaigning is strictly prohibited, encouraging a member to run for office is permitted.

Executive officers are elected by the Board of Directors after the election of new Directors and the President. The offices of Vice President, Hospitaller, and Chancellor are subject to election this year. Members may self-nominate for these positions as well, although the due date for the nomination forms is later, after the final ballot tabulation. Questions regarding the election process may be directed to Jane Belford, DM, Chair, Nominating Committee or click here to email the committee. - Jane Belford, DM, Chair, Nominating Committee and Gregory Granitto, KM, Chancellor 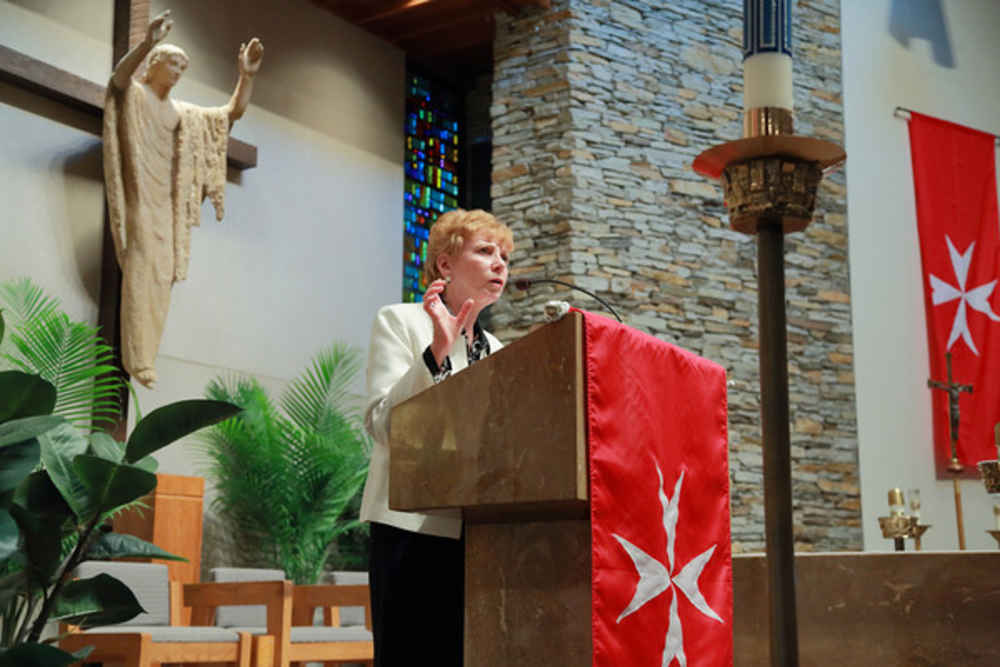 Marie Hilliard, Ph.D., DM, director of the National Catholic Center for Bioethics and Public Policy addressed a crowd of over 350 in Lancaster, PA on May 22nd with her powerful talk entitled, “With Liberty and Justice for Some”. Citing case law and the First Amendment, she challenged the audience to see that the Health and Human Services mandate is an attack on religious freedom.

Dr. Hilliard began with an explanation of the two parts of the First Amendment that protect religion: the Establishment Clause and the Free Exercise Clause. She went on to illustrate how the freedom to live by one’s conscience is the core of the Free Exercise Clause and that when the government mandates that persons violate conscience it is restricting religious freedom. Dr. Hilliard gave many examples in which states and the federal government have been mandating actions that violate the consciences of health care providers including efforts to force participation in abortion or dispense contraceptives including morning after pills.

She believes that the most recent mandate by HHS is a continuation of this move towards establishing secularism as the official belief system. Dr. Hilliard explained how the HHS mandate requires all employers to provide free contraception, abortifacients and sterilization in their health care plans. Only a few religious organizations are exempt, but not our Catholic hospitals, colleges and charities. She said that the “accommodation” offered is an accounting misrepresentation since many of these groups are self-insured. Catholic hospitals provide a significant amount of health care in this country and support health care for the poor.

It is in this context of being the largest provider of non-governmental health care, education and social services, that the Church seeks to exercise its First Amendment right to an exemption from this mandate. Now these same providers are being forced to choose between delivering their ministries or violating their consciences. Dr. Hilliard pointed out that there are only three things a Catholic hospital won’t do: “We won’t kill you even if you ask us, we won’t kill your unborn child, even if you ask us and we won’t surgically or chemically mutilate a normal, healthy function.” Other provisions of the new health care law will force Catholics to pay for and possibly offer these services without exemption because it excluded the Hyde-Weldon Amendment. Furthermore, due to the limited definitions of exempted medical procedures in existing state and federal laws, rules and regulations, such exemptions are tenuous, at best.

Click here to listen to a podcast of her presentation. - Peter Scudner, KM, Lancaster

All former pilgrims are invited to the annual Lourdes Reunion on July 20-21 at Mt. St. Mary’s University. There is Mass and dinner on Friday night and Rosary, Mass, and lunch on Saturday. There is plenty of time to visit with old and new friends from Lourdes.
Please click here for more information and to sign up.

The retreat fee includes all meals and conferences. Overnight accommodations are available in the St. Mary’s Retreat Center; transportation can be arranged for out of town guests. This Retreat can be used to help fulfill a Candidate’s Spiritual Activity requirement.