According to the rule and spiritual guidelines, accepting the Cross of the Order imposes duty and sacrifice. Members are obliged to the sincere and open profession of the Catholic faith. As such, they endeavor to steadily continue their religious education and spiritual development—through prayer and reading and meditating on the Gospel, the Catechism, and other principal documents of the Church and the Order.

Like other orders, the aim of The Order of Malta is the greater glory of God through the sanctification of its members. And, as with all other orders, it is imbued with the charism and ideals of its founder—Fra’ Gerard—who set forth in his work the mission of defending the faith and serving “our lords, the sick and the poor.”

The Order has as its object to promote the Glorification of God by the sanctification of its members, service to the Faith and to the Holy See, and helping one’s neighbor, in accordance with its secular traditions.

The spirituality of the Order is rooted in its religious, chivalric, and hospitaller traditions. Though it has chaplains, it is not a clerical order—it has always retained its lay religious character. Until the loss of Malta, the membership was predominantly one of professed lay persons—those who were in vows. But, since the mid-nineteenth century, the number of professed has declined and, today, most members do not take full vows. However, one of the chief aims of the Order is still the spiritual development of its members.

To belong to the Order is certainly an honor, but it also necessarily implies a sincere compliance with Christian testimony. Thus arises the concept of vocation or calling—one of the mysterious ways by which grace calls upon souls to approach God.

Members cannot fulfill their duty merely by financial contributions. Wearing the insignia of the Order demands of members the participation of their full personhood and the use of all their efforts and gifts on behalf of the Order and those in need. Participation in religious functions and activities of the Order is important as it encourages the fraternal spirit that binds members together.

Charity and faith are still the essential characteristics of the Order. They constitute the Christian testimony to be given by those who serve under the sign of the white octagonal cross, symbol of the eight beatitudes.

The Federal Association, in accordance with the aims of the Order, provides opportunities for members to cultivate their spiritual development. 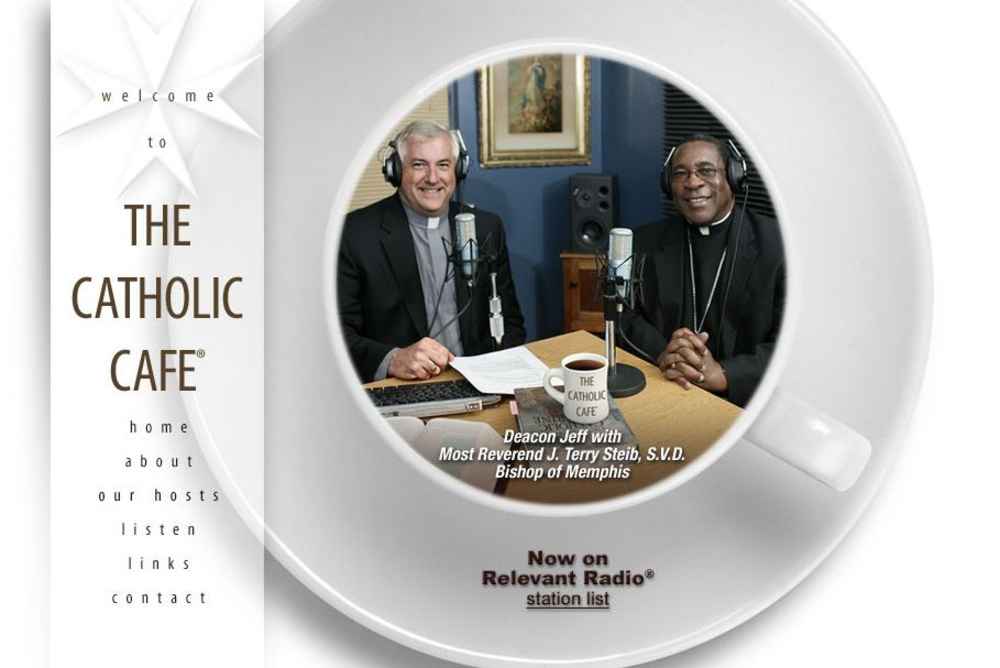 The Catholic Cafe is supported through a grant from the Federal Association.  Its board members and officers are all members of the Order of Malta serving with the approval of the Bishop of Memphis. The mission of The Catholic Cafe is to reach out to non-Catholics and fallen-away Catholics with positive, high quality radio and Internet programming to faithfully present Catholic teaching and follow up with personal outreach when requested. If you are Catholic, the hope is that the time you spend in The Catholic Cafe is spiritually uplifting and helps you grow in your faith. If you are not Catholic, you are invited you to explore the Catholic Church, and prayerfully think about becoming part of our family. If, for whatever reason, you have been away from the Church, you are invited to consider that God might be calling you home.

A new thirty-minute radio program is produced weekly by host, Deacon Jeff Drzycimski, an Associate Deacon Chaplain of the Federal Association.  Along with co-host, Tom Dorian, they engage a variety of guests in conversation about the teachings of the Catholic Church.

Click LISTEN to hear current and past shows, which are indexed by topic. Or, you can sign up for a free, weekly podcast of The Catholic Cafe.  This program is also featured on Relevant Radio, talk radio for Catholic life which is broadcast in over 30 cities.

The Chaplet of the Order 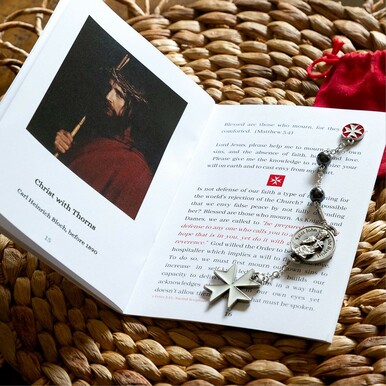 The Chaplet of the Order is a new sacramental. The image of the chaplet came to a knight and dame who lead the Spirituality Committee in the Charlotte Region while they were working on materials for a monthly spirituality call related to the Beatitudes in 2020. They immediately drew on a piece of paper what they believed had been revealed to them as a new devotion that would support the spiritual renewal of the Order. They were also inspired to write prayers to accompany each section of the chaplet, including unique prayers specifically for knights and dames to reflect on each of the Beatitudes.

They shared the chaplet design with a company in Italy to have a prototype created. It took about two months to have the prototype designed, hand-crafted, and sent to them in North Carolina. The prototype and the newly written prayers were then shared through their hospitaller with leadership at the Federal Association, where permission was given to proceed with the creation of this new devotion. A member of the board of directors for the Federal Association suggested seeking the blessing of the chaplet and associated prayers—through the chaplain of the Charlotte Region—from the bishop of Charlotte for use by the faithful as an official sacramental of the Church. The approval was provided in 2021. To our knowledge, this is the first sacramental devoted to the Beatitudes and the Order of Malta in the history of the Catholic Church and the 900-year history of our Order.

What had started as an inspiration from the Holy Spirit had become a reality. The knight and dame worked with a Catholic-owned company in Italy and a Catholic-owned company in the United States to make the chaplet available to all members of the Order in all regions, association, priories, and sub-priories around the world. The knight and dame who designed and made this gift to the Order do not receive any personal benefit other than the ability to pray this new sacramental. The companies they worked with are only recouping the costs related to the materials and labor needed to make the chaplet and prayer booklet available around the globe.

To learn more about the chaplet and prayer booklet, please contact Cameron and Natalie Jackson at either cameronljackson1@gmail.com or nlkjackson3@gmail.com.

Daily Prayer of the Order:

Thou hast seen fit to enlist me for Thy service in the Order of St. John of Jerusalem. I humbly entreat Thee, through the intercession of the most holy Virgin of Philermo, of St. John the Baptist, Blessed Gerard, and all the saints, to keep me faithful to the traditions of our Order:

Give me the strength I need, to carry out this my resolve, forgetful of myself, learning ever from Thy Holy Gospel a spirit of deep and generous Christian devotion, striving ever to promote God’s Glory, the world’s peace, and all that may benefit the Order of St. John of Jerusalem.

Calendar of Liturgical Celebrations Proper to the Order

Please click here to view the full listing of all the Saints and Blesseds of the Order of Malta.

A Reading List of Books Related to the Catholic Faith

Prayers of the Faithful

For the Federal Association of the Order of Malta

The post The Order’s embassy to Namibia inaugurates a new professional school in Döbra appeared first on Sovereign Order of Malta.

The post The Holy Family Hospital in Bethlehem expects the birth of its 100,000th child appeared first on Sovereign Order of Malta.

The post Sixth World Day of the Poor appeared first on Sovereign Order of Malta.

The post Gratitude of Head of the Ukrainian Greek Catholic Church appeared first on Sovereign Order of Malta.

The post Visit of Greek Alternate Minister of Foreign Affairs to the Magistral Villa appeared first on Sovereign Order of Malta.

The post Pilgrimage to Loreto with the sick appeared first on Sovereign Order of Malta.