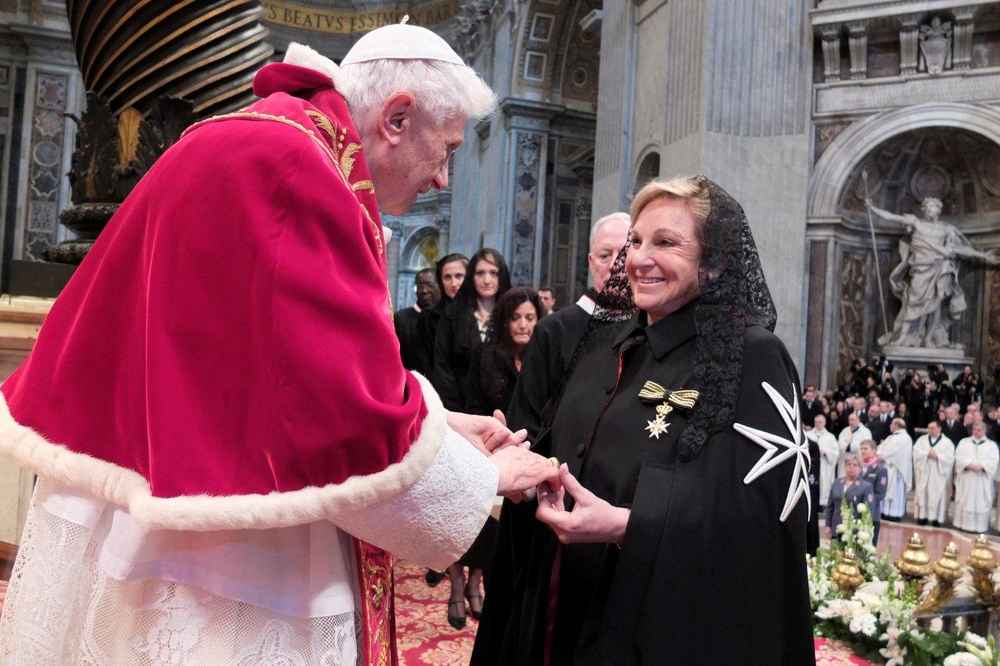 Over 5,000 members of the Order and their family members from around the world gathered in Rome February 8 – 10 to participate in activities commemorating the 900 year anniversary of the signing of the Papal Bull in 1113 that officially recognized the Order of Malta as an order of the Church. Officers and other delegates attended planning meetings on Thursday and Friday while others participated on tours including the Vatican Museum, the Basilica of St. John Lateran, and the Academia Dei Lincei. The highlight of the weekend was the special Mass for the Order on Saturday at St. Peter’s Basilica. The procession of Professed Knights, Knights, Dames, Donats, and members of the Order’s various volunteer organizations lasted for 40 minutes and every seat in the basilica was filled when Mass began at 10:30. His Eminence Tarcisio Cardinal Bertone, the Secretary of 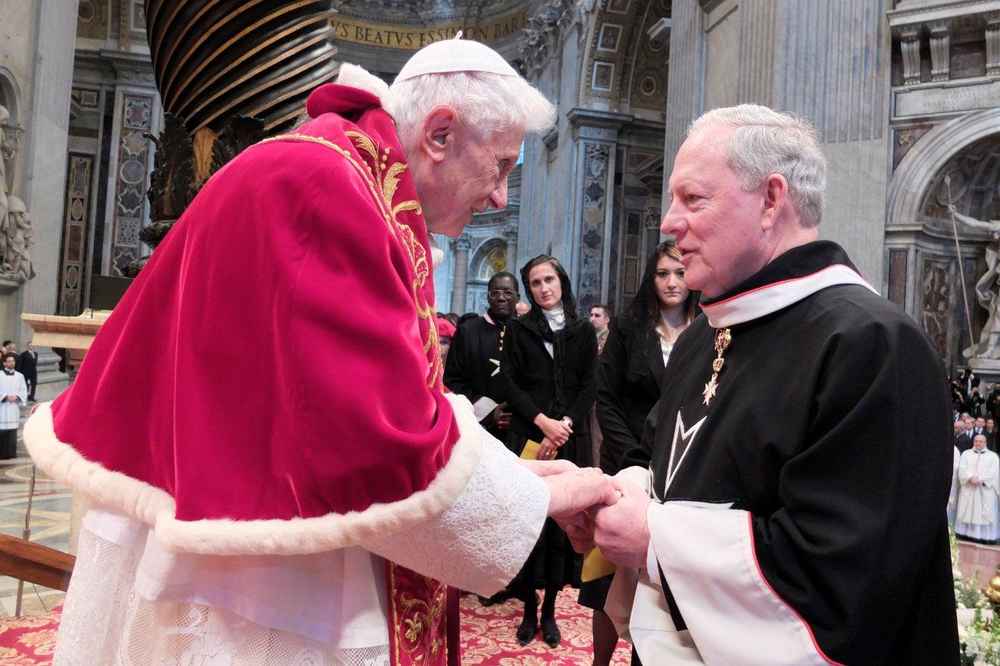 State for the Vatican was the principal celebrant, and Daniel Cardinal DiNardo, Archbishop of Houston and a Conventual Chaplain ad honorem was one of the many concelebrants. Federal Association member, Fra’ Thomas Mulligan was chosen to read the second reading. After Mass the Holy Father, Pope Benedict XVI, processed up the center aisle to the sustained applause of the congregation. He was greeted on the altar by the Prince and Grand Master, Fra’ Matthew Festing. The Holy Father then addressed the members of the Order, praising the Order for its steadfast adherence to its original mission of caring for the poor. Click here for the Papal Address. After the address a small group of representatives had the chance to meet and spend a moment with the Pope. Included in that number were Federal Association members Noreen Falcone and Charlie Wolf, pictured above. 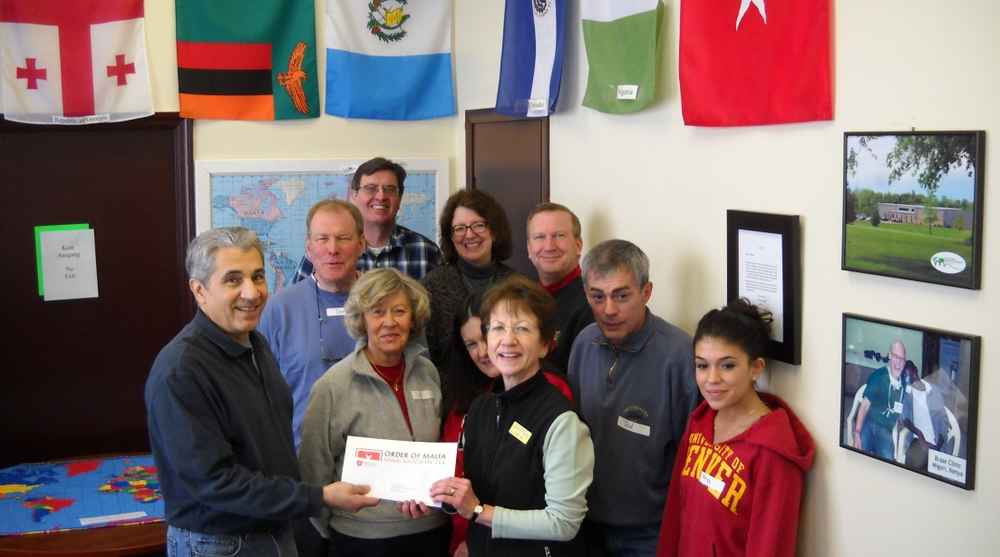 Mission Outreach has been a project of the Federal Association’s Chicago Region for the past 4 years. It is administered by the Hospital Sisters of St. Francis whose mission is to respond to the sick, poor, and needy around the world through a surplus medical supply and equipment recovery and distribution program. Joan Trandel, DM began working at Mission Outreach with her parish and thought that it would be a great project for the Chicago Region. Their humble beginnings were in Springfield, Illinois in 2002 where the primary warehouse is located. To date over 300 containers have been sent to countries all over the world.
Most of our involvement with Mission Outreach is in a warehouse that is in the Chicago suburb of Bedford Park, Illinois near Midway Airport where members, candidates, and auxiliary sort, pack, weigh and ship medical supplies, surgical instruments, and equipment to needy countries. Last year in January we filled a 53 foot container with material that was bound for Haiti. The local temperature was about 15 degrees and one knight commented, "The next time this container will be opened it will be warm, and unloaded by people who desperately need it."
In addition to our service at the warehouse, we have also collected supplies. Our members from Wisconsin organized a two month long effort to collect gently used walkers, crutches, canes, and wheelchairs from parishes in the Milwaukee Archdiocese and sent a truck load of these materials to Mission Outreach.
These materials would end up in a landfill in the United States if the Hospital Sisters did not begin this program. While sorting surgical instruments, Dr. Edgardo Yordan said that most of the instruments would routinely be discarded in hospitals, but if you are in a Third World country and you need that particular instrument to complete a procedure, you are very grateful to have it. Doctors in these regions operate with very scarce resources.

The people we assist through our work with Mission Outreach are far away, but the materials we gather, sort and pack help to provide better medical care to the poor and the sick. - Dr. Sam Ciccarelli, Regional Hospitaller for Chicago

SMOM Q & A -
What are the Origins of the Order’s Pilgrimage to Lourdes?

What we know as the “Order of Malta” was born in pilgrimage. The tradition is that our founder, Brother Gerard, was a merchant (perhaps from Amalfi on the Italian coast) who came to the Holy Land on business near the end of the 11th century. He was shocked to see that the numerous pilgrims who visited the sacred places in and near Jerusalem often fell prey to disease, starvation, or robbery. Because his heart went out to these pilgrims, and because he felt it wrong that they suffered so much near the place where Jesus had suffered, he joined with a small group of like-minded men to begin what became the Sovereign Military Hospitaller Order of St. John of Jerusalem, Rhodes, and Malta.
As the name suggests, the headquarters of the Order was forced from the Holy Land, eventually to the island of Rhodes and then to the island of Malta, and under pressure from Napoleon in 1798, back to Europe. But the local and national groups which made up the Order all along maintained a variety of religious traditions – among them pilgrimages to holy places.
As increasing attention was focused on the shrine of Lourdes after Our Lady appeared to Bernadette in 1858, pilgrims from all over Europe, Britain and Ireland flocked to the site. Eventually, the British Association of the Order began an annual pilgrimage to Lourdes.
In 1962, Fra’ Angelo de Mojana di Cologna was elected the 77th Grand Master of the Order. To celebrate the anniversary of his election in 1963, he joined the British Association’s pilgrimage to Lourdes. The event was so successful that the Grand Master made it an official pilgrimage of the Order – really, the chief event of the worldwide Order each year, during the first week of May.
Gradually the Associations in the United States came to join the pilgrimage. Although the Federal Association was the last to have an “official” pilgrimage, our members Bill and Annelise FitzGerald, Bill and Betty Callaghan, John Harvey, and Henry Lane Hull began to join in with the Western Association, USA.
Finally, in May 1989, our Conventual Chaplain ad honorem James Cardinal Hickey led the first “official” pilgrimage of the Federal Association. A group of about thirty members, malades, companions and volunteers flew on a commercial jet from DC to Paris, changed airports and airplanes in Paris after a visit to the place of the Miraculous Medal at the Rue de Bac, and flew to an airport near Lourdes. Our first pilgrimage was a resounding success, and it has been repeated every year but one since then. From the original group of thirty, the Federal pilgrimage has grown to include nearly 300 pilgrims annually. The year 2014 will mark the 25th anniversary of the Federal Association pilgrimage. – Shep and Kathryn Abell 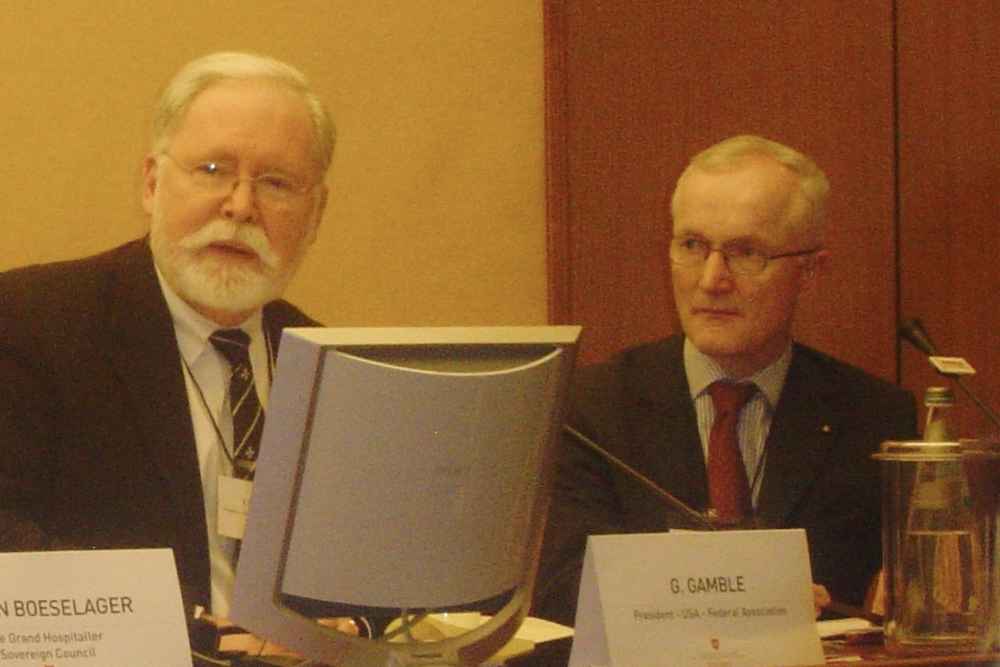 More than 300 participants gathered for an International Working Conference of the Order of Malta in Rome on February 7 and 8. Among the attendees were members of the Sovereign Council, Knights of Justice, officers from Order of Malta associations throughout the world, and many of the Order’s ambassadors. In his opening remarks, HMEH Grand Master Fra’ Matthew Festing declared that the Order of Malta, having reached its 900th year will “continue as long as there is suffering in the world.” Speaking in English, French, Italian and Spanish, representatives from five continents presented ideas and offered best practices on topics of membership, spirituality, sovereignty, communications, safeguarding the Order from legal liability and protecting its names and emblems.
In discussing the recruiting of new members and the formation process, speakers emphasized the need to foster understanding of the Order’s regulations and commentary. The Grand Master Festing asked that we increase our efforts to encourage vocations to the Order’s professed life for these members are essential to maintaining a religious order. To best serve our Order, participants suggested that we need chaplains with experience in spiritual guidance.
Regarding diplomacy, the Order’s ambassadors explained that the Order’s sovereignty allows it to serve peace in the world by aiding the poor and the needy. In many countries, sovereignty is the instrument by which hospitaller works can be effective. The Order’s ambassadors need to be vigilant in avoiding being drawn into political issues.
During the session on internal and external communications, the thematic leader of the discussion Richard Josef Wolff claimed that “communications must be at the center of our activities.” He urged the Order to continue “professionalizing” our communication strategies and techniques at every level. Among the ongoing projects of the Grand Magistry’s Department of Communications are the building of data bases on the Order’s world-wide works and a comprehensive directory of members and their skills. A number of national associations spoke of adding a communications professional to their staff.
Our Federal Association President Geoff Gamble (pictured above) moderated the discussion on safeguarding our Order from legal liability, and Fra’ John Dunlap, the American member of the Sovereign Council, led the discussion on protecting our Order’s names and emblems.