ASSISTING THE MISSIONARIES OF THE POOR

New Bibles donated to the prisoners on behalf of the Order

On July 5th - 7th members of the Order from the Charlotte Region traveled to Kingston, Jamaica to work with Fr. Richard Ho Lung and the Missionaries of the Poor (MOP) brothers in their ministry to the poor, disabled, and imprisoned. The Charlotte Region is donating approximately 2000 Bibles, 2000 catechisms, and 4000 other spiritual books to the MOP as part of its Defense of the Faith initiative.

The Defense of the Faith initiative for prison inmates grew out of the Charlotte Region’s ongoing support of the MOP in their Monroe, North Carolina monastery. In North Carolina the brothers work with the local poor and disadvantaged. They also collect food, clothing, diapers, and other necessities that are sent to MOP centers overseas.

Jackie and Bob Gallagher together with their son Conor and friend and business associate Rick Rotondi delivered the first shipment of Bibles to inmates at the Tower Street prison in Kingston on behalf of the Order.

The Tower Street prison is a facility designed to house 1400 prisoners. Presently there are 1700 men housed generally four to a cell. The MOP attend to the spiritual needs of the prisoners to the extent allowed by local authorities.

The MOP brothers operate five centers in the ghetto of Kingston and one just outside of Kingston in the mountains. In these centers they feed, clothe, shelter, and give medical aid to approximately 600 physically and mentally challenged men, women, and children. Each center operates 24 hours a day, seven days a week.

The MOP was started by Fr. Richard Ho Lung, a Jamaican of Chinese parentage. A convert to Catholicism, Father Ho Lung began his priesthood as a Jesuit in academia. He taught at Boston College and the University of the West Indies in Jamaica. But during these years he could not forget his roots in the ghettos of Jamaica.

In 1981 Father Ho Lung left the Jesuits and the comforts of academic life and founded the MOP. Today the MOP has 600 brothers who serve the poor and needy in Jamaica, Haiti, the Philippines, Uganda, Kenya, India, Indonesia, and the United States.

The Gallaghers and Rick Rotondi visit with the Brothers and friends

Two years ago Father Ho Lung founded the Sisters of the Missionaries of the Poor to care for unwed mothers and their babies. He did so in response to a challenge by a pro-abortion Jamaican politician. Father had been fighting abortion legislation, and his opponent pointedly asked how Father would care for the unwanted babies he saved. Today after just two years the Sisters of the MOP have a monastery built by the MOP brothers. Approximately 10 sisters in formation to serve the unwed mothers and children of Kingston’s ghettos.

If you would like more information on Father Ho Lung and the Missionaries of the Poor, you may contact Jackie Gallagher.

from REGULATIONS AND COMMENTARY

The Prince and Grand Master Fra’ Matthew Festing reminds us that we need to read and reread the Rule of the Order frequently. Here is our monthly selection from Membership in the Order of Malta: REGULATIONS AND COMMENTARY to help us in perfecting our lives as followers of Christ and as members of our Order.

- The Order should become a spiritual home for new Members, who must be well aware that they are becoming Members of a religious Order. Persons who are much engaged with other Catholic orders, secular institutions or New Communities or Movements, and see the Order simply as an additional field of activity or even worse as an additional decoration, cannot become convincing and reliable Members capable of living the true nature of the Order.

Membership in the Order of Malta REGULATIONS AND COMMENTARY, VI. ADMISSION TO THE THIRD CLASS - Page 51, REGULATION, - Click here to read full text –

In Tracing the Order’s Charism, John T. Miller, KMOb, has compiled articles that he researched and wrote for publication in the “Federal Malta Review,” a printed newsletter edited by the late Dr. Regis Louise Boyle, DM. Begun in 1991 and lasting through 2004, this newsletter was the Federal Association’s first effort to regularly communicate with its members.

John Miller wrote nearly 30 articles. Most of the articles are the product of travels in Europe and the Near East to places of interest to members of the Order of Malta. The book provides excellent travel tips for seeing some of the Order’s historical sites. One article on the rich history of the Order in Provence, France, describes John Miller’s visit to Manosque, a town about 60 miles northeast of Marseille where the remains of Blessed Gerard were transferred in 1280. Read more about this history here - Tracing the Order’s Charism is printed at cost, with no revenue to the author. Its price is $7.69 plus shipping and handling. To place an order, navigate to the following link: http://bit.ly/JTMillerJr 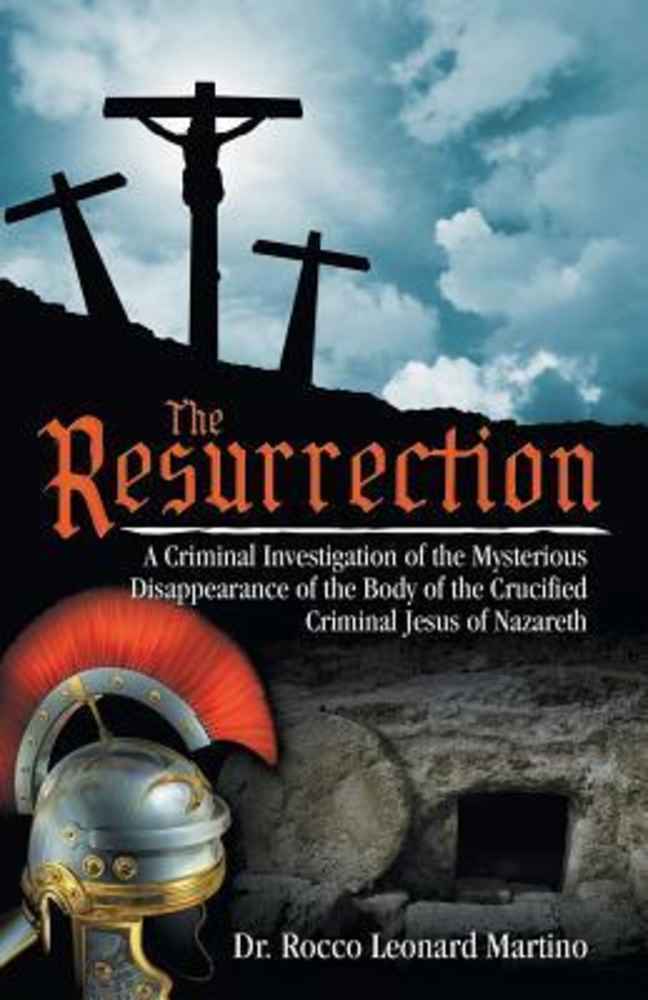 Another Federal Association member, Dr. Rocco Martino has just published his second novel, The Resurrection: A Criminal Investigation of the Mysterious Disappearance of the Body of the Crucified Criminal Jesus of Nazareth. Rocco Martino attempts to pursue an investigation along the lines of a detective mystery. The evidence of this mysterious resurrection is presented to the reader as if it is being presented to the Roman Emperor. It can be found at Amazon.com.

More than 110 members, candidates and volunteers served close to 450 guests at the 5th Annual Order of Malta/Johanniter Wounded Warrior BBQ at the Walter Reed National Military Medical Center. President Geoff Gamble and his wife Dorcas travelled to Washington to participate as servers on the buffet lines.

Rev. Msgr. John Enzler, Federal Association Chaplain brought seminarians from the Archdiocese of Washington who spoke with the families on an informal basis. Sligo Creek, a four piece acoustic band, from Frederick, MD, provided music and entertainment for the afternoon.

This past year our work at Walter Reed has included Prayer Breakfasts, Luncheons for Caregivers, Dinners at the Navy Lodge and the Fisher House, with outreach to Ft Meade in MD and Ft Belvoir in VA. Volunteers are needed to continue the work serving our Wounded Warriors. If you would like to participate, please contact Larry Demaree 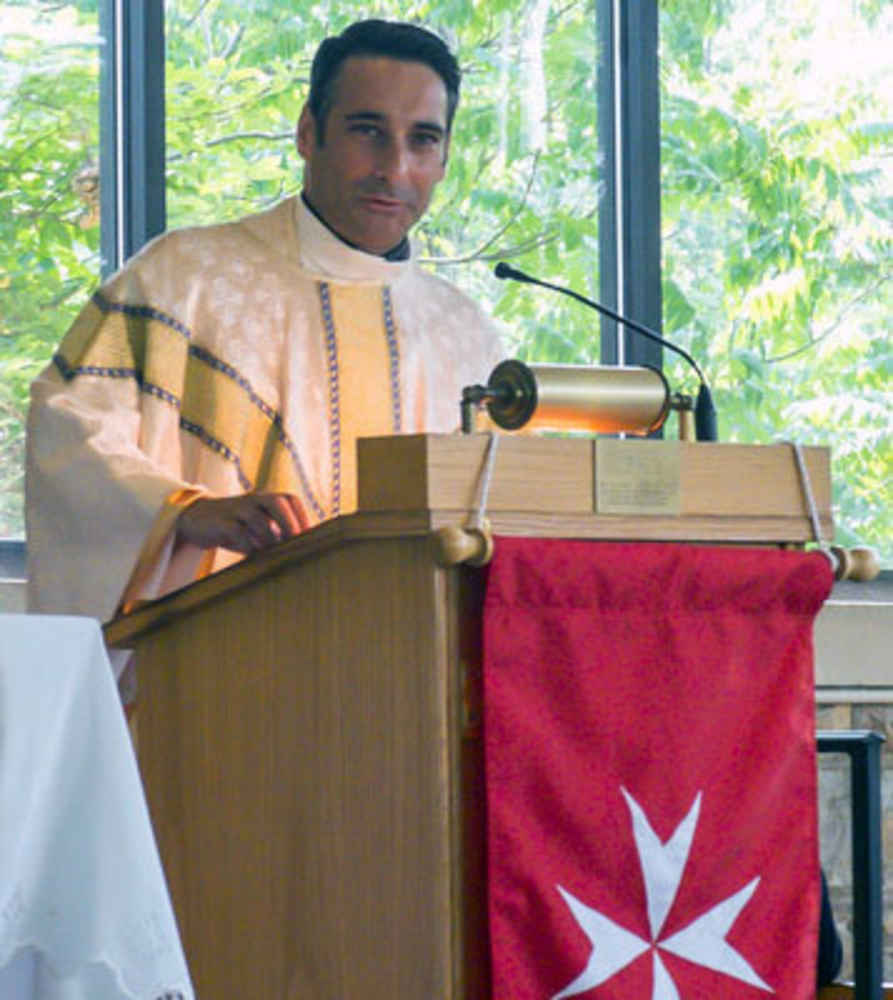 On July 20th over 120 former Lourdes pilgrims from around the country gathered for a Lourdes Reunion at Mt. St. Mary’s Seminary and University in Emmitsburg, Maryland. Rev. Richard Mullins, Magistral Chaplain and longtime pilgrimage participant, celebrated the opening Mass in the Glass Chapel, very near the National Shrine Grotto of Lourdes. After Mass the group gathered for lunch and great fellowship in the university’s Patriot Hall. 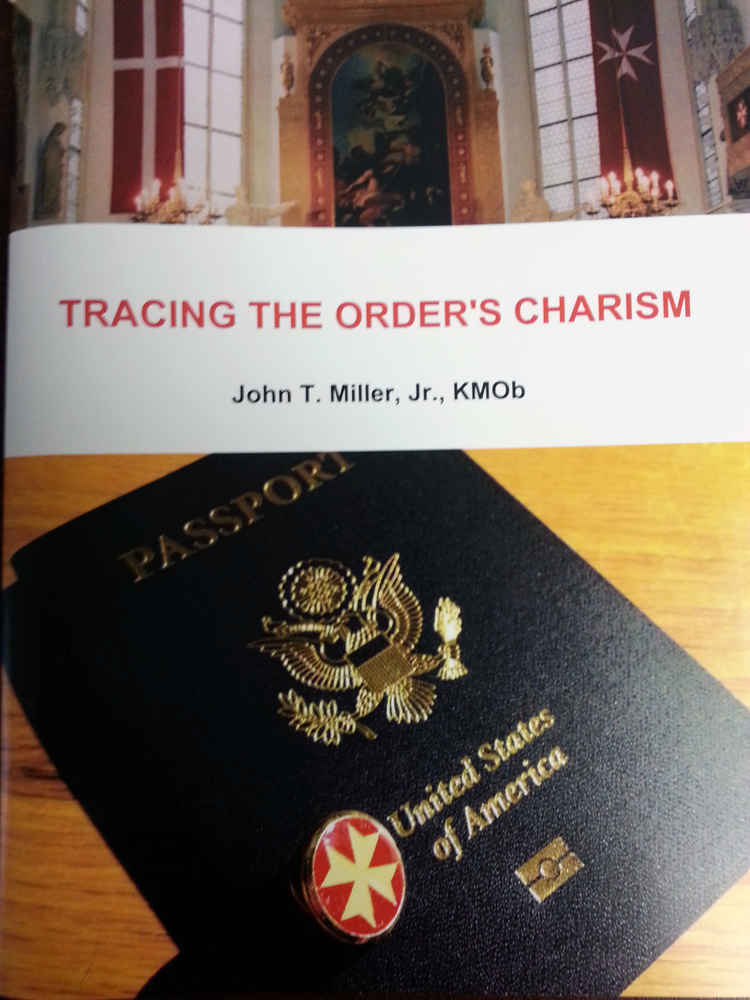 Tracing The Order's Charism - by John T. Miller, Jr., KMOb
Some publications recommended by the Order of Malta International