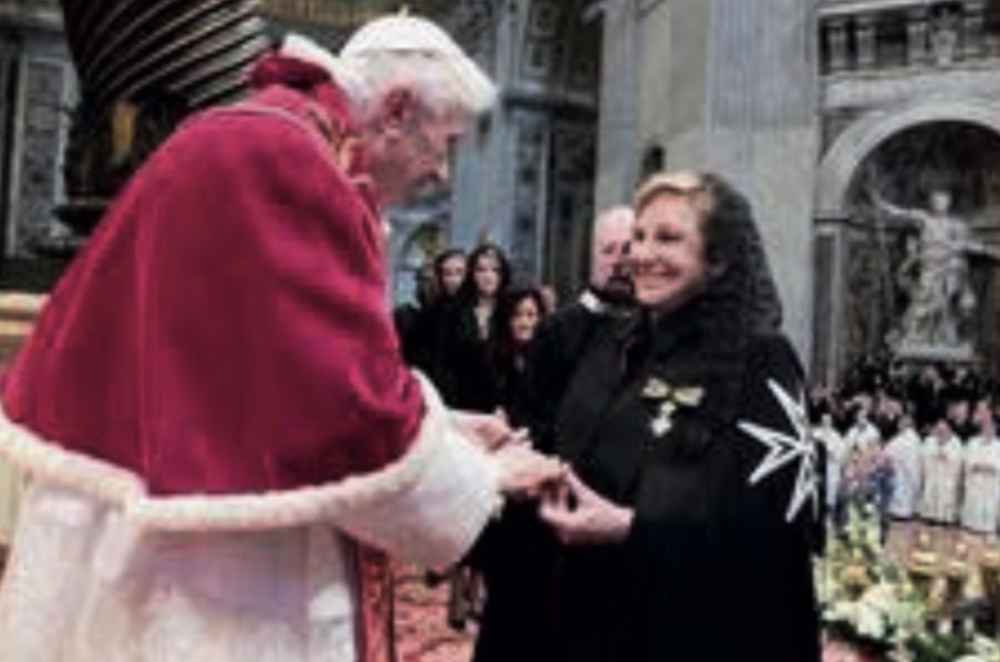 Noreen Falcone, who died February 6, was a trailblazer for our Federal Association and the Order of Malta. Invested in the Order in 1993, she became a founding member of the Syracuse Region. Already a leader in her parish and community, she worked tirelessly to build the region by organizing service projects and introducing the mission of the Order to prospective members. Beginning as a co-hospitaller of the young Syracuse Region and a member of the Admissions Committee, Noreen’s leadership talents were quickly recognized. She became a member of the Federal Association board of directors, and then served in officer roles, including chancellor and vice president.

In 2006 Noreen Falcone was elected by our members as president of the Federal Association and the first woman to lead a national association in the 900-year history of the Order of Malta. She was also the first president of our Federal Association who resided beyond the Washington area, signaling the current and future growth of our membership. A dedicated and inspiring leader, she commuted to Washington, traveled to other regions and abroad, and often used her sense of humor in response to unexpected challenges.

Two years into her presidency, the Order lost its Prince and Grand Master Andrew Bertie, and a Council Complete of State was called to elect a new grand master. The Federal Association was chosen as one of 15 national associations to participate in the council. Noreen Falcone and then-Vice President Paul McNamara traveled to Rome to prepare for this task. They were both cordially welcomed to all of the events—except the election itself. Relying on tradition, the leaders of the Order declared that women could not enter the solemn Council Complete to cast the ballots for the next grand master. Noreen firmly responded that she was the elected president but when there appeared to be no movement to change opinions, she graciously agreed to have her vice president represent her. As always, Noreen handled the situation with dignity, kindness, and grace.

Noreen made her first pilgrimage to Lourdes in 1996 and joined the pilgrimage almost every year thereafter. Her comforting care for the malades was a model for all. She was especially drawn to the children who came as malades.

At her funeral, the homilist spoke of her primary vocation to be a spouse and mother. She excelled at her vocation and carried those talents into the Order’s service. A prime example was her ardent support of maternity and neonatal care provided by the Holy Family Hospital in the Holy Land, joining with her husband Michael as founding donors of the Holy Family Hospital of Bethlehem Foundation.

During her presidency and afterward, Noreen remained close to her confreres in the Syracuse Region, always ready to help in their effort to serve the poor and the sick. She also was the ultimate hospitaller, welcoming friends and associates into her home. A number of us were privileged to be received at her lakefront residence where she sometimes invited a chaplain to celebrate Mass on the terrace overlooking the lake. Noreen’s love of the Catholic faith and her commitment to the life of the Church were unbounded. These permeated her being and overflowed to all her relationships—her love of her husband Michael, her four children, her 14 grandchildren, and us, her friends and colleagues. Noreen will be greatly missed by all.

Merciful Lord, we pray that the gates of Paradise will be open to your servant Noreen.