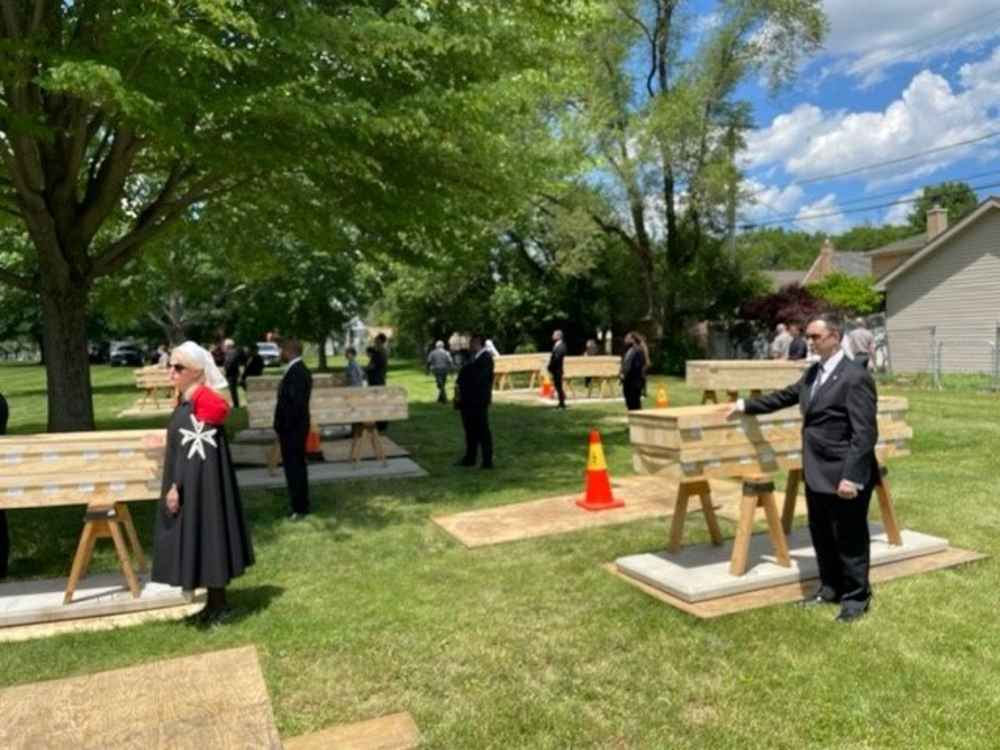 The Chicago Auxiliary, through its recently constituted Pall Bearer Program, along with co-hospitaller Suzanne Hollerbach Nelson, received a procession of 13 hearses carrying the cremated remains of 333 Cook County residents at Mt. Olivet Cemetery in Chicago. There were no family members previously identified for the deceased. They left this life without the presence of loved ones by their side to mourn for them, many with names known only to God.

Thanks to an agreement in 2012 between Cook County and the Archdiocese of Chicago, and arranged by our own late Cardinal Francis George, the remains of the indigent, the unknown, and the unborn were interred in the hallowed ground of the Archdiocesan cemetery. Wearing the Order’s service uniform, knights, dames, and auxiliary received the decedents, and by their presence and prayers helped give them a dignified burial, which included an escort as honorary pallbearers by the Chicago Auxiliary. They may have died alone, but they were accompanied by the love and prayers of the Order of Malta through the intercession of Our Lady of Philermo, St. John the Baptist, and Blessed Gerard. 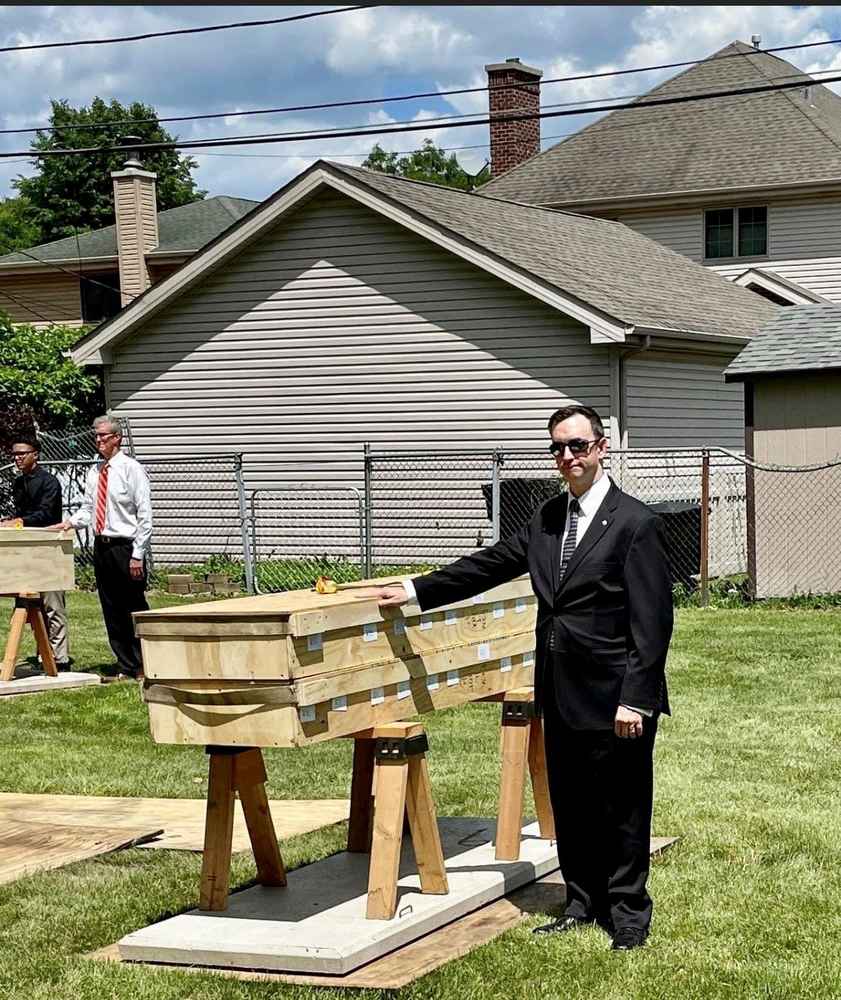 Auxiliary members, the co-hospitaller, and some boys from the local Marist high school stood and placed their hands on 17 simple, plywood caskets holding the remains and resting on wooden saw horses atop the graves. The chaplain led the Church’s prescribed suffrages for the dead, including the powerful Bidding Prayers that call together the entire Church throughout the ages in her martyrs and confessors, angels and archangels to escort them into the New Jerusalem and present them to our merciful Lord. The caskets were then sprinkled with Holy Water by the chaplains and the president of the Board of Commissioners of Cook County.

Then, as the small crowd dispersed, the caskets—marked by white tags displaying perfunctory information such as name (if known), date of birth, date of death or the day the remains were discovered—were slowly lowered into their graves. The Order of Malta remained. Using a rosary of the late Deacon Ed Gronkiewicz, members and auxiliary prayed the Sorrowful Mysteries, the Prayer to St. Michael, and the Daily Prayer of the Order. Almost as a sign from Our Lady, as members finished the Daily Prayer, the very last of the 17 caskets had been lowered. 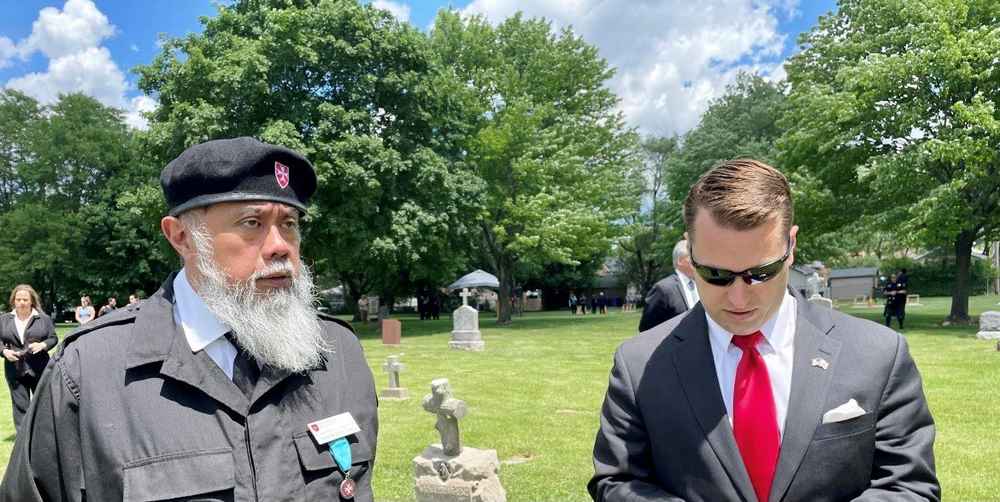 The Chicago Auxiliary Pall Bearer Program was inspired by an original idea of the late Jim Skerl, who taught theology at St. Ignatius High School in Cleveland. He started the program to provide pallbearers to local funeral directors who called him when a family was too few, too old, or when the decedent had no one to bury them at all.  Basil Damukaitis adopted the idea for the growing Chicago Region Auxiliary and was asked to re-constitute it by then-hospitaller Rick Klein. After three years' time, which includes the Covid-19 Pandemic, the auxiliary now numbers nearly 20 members, three of whom will be invested this year.

Eternal rest grant unto them O Lord, and let perpetual light shine upon them.

May the souls of the faithful departed, rest in peace. Amen. 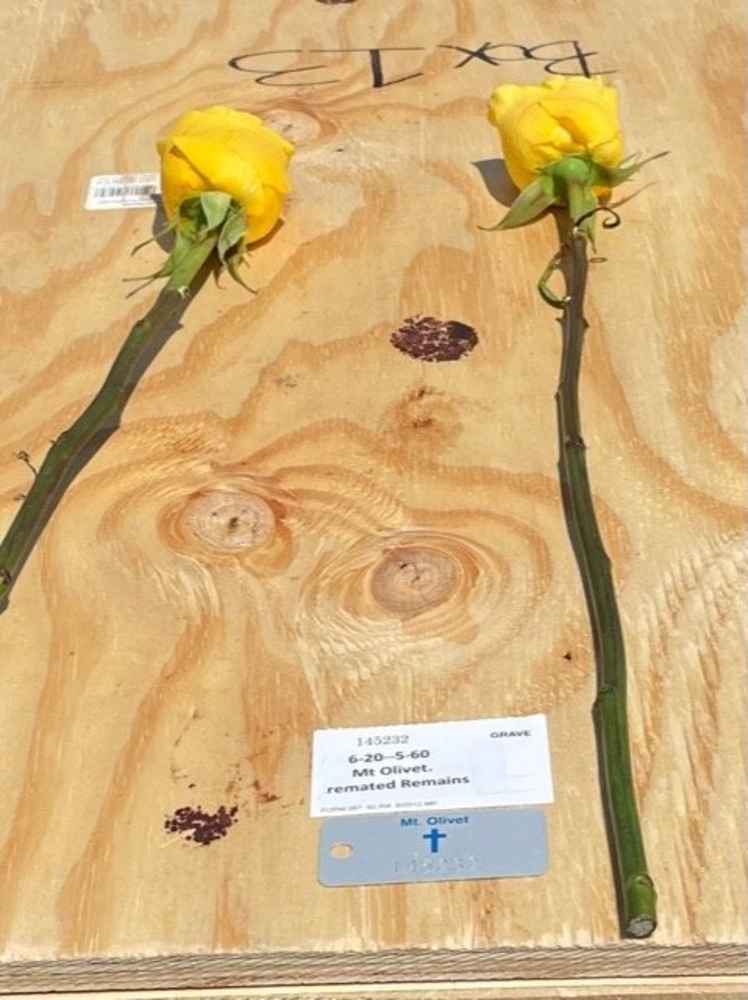