"Hope is our anchor, Father Riccardo tells Order of Malta" 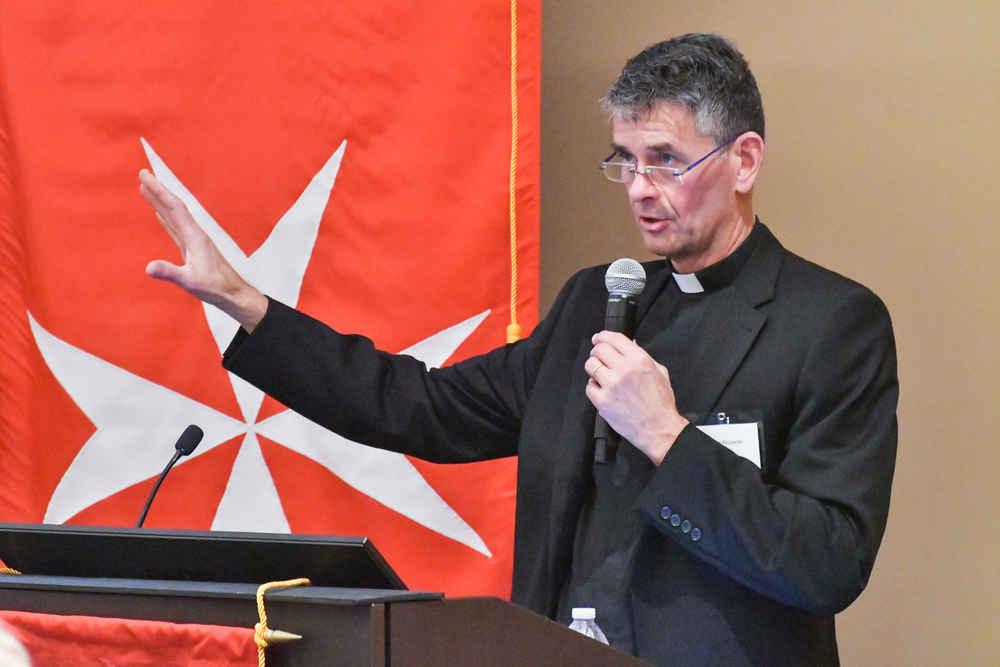 Please read below an article written by The Catholic Times of Columbus, Ohio. "Hope is our anchor, Father Riccardo tells Order of Malta", reports the talk Father John Riccardo gave during the Fourth Annual Hospitaller Dinner.

"Father John Riccardo, a priest from the Archdiocese of Detroit and founder of the Acts XXIX apostolate, addressed the Knights and Dames of the Columbus Region of the Federal Association of the Order of Malta’s fourth annual Hospitaller Dinner.

Approximately 170 people attended the dinner and talk on Thursday, Nov. 3 in the Jessing Center at the Pontifical College Josephinum.

One of the charisms of the Order of Malta is the defense of the faith, and the annual dinner serves to fulfill that commitment for the order and the broader community. The event also is the primary fundraiser for the order’s Center of Care in Columbus, which provides health-care services and personal care items to those in need locally.

In addition, the Columbus region recognized individuals who have supported its mission through service to the poor and sick at the Center of Care.

Dr. Tom Rankin, DDS was honored as the Healthcare Professional of the Year and Marilyn Dono as Non-Healthcare Volunteer of the Year. Father Thomas Blau, OP, the region’s chaplain, presented their certificates.

The order also paid tribute to Dr. Michael Parker; Jeff Kaman; Dr. Marian Schuda; Dr. Will Turek; Julie Winland; and Norman and Robin Altman for their service and support of the Center of Care during the COVID-19 pandemic. These volunteers received the COVID-19 Medal and Certificate from the Sovereign Council in Rome.

The Center of Care is staffed by volunteers of the order, the Catholic Medical Association and members of Columbus Holy Rosary-St. John Church, where the center is located.

Father Riccardo, in his “Riding Out the Storm” presentation, encouraged listeners to be missionaries of hope.

“I don’t give ‘talks.’ I just don’t think that’s what I’m supposed to do as a priest,” he said. “I think I’m supposed to listen to what the Lord wants to say and then to give that word to share.

“There is a raging storm out there right now. It’s rough in the culture, and it’s rough in the Church. … We’ve seen crisis after crisis, scandal after scandal. … The waters are choppy, to be sure.

“There are boatloads of needs in the Church right now, but hope is a desperate one. It’s a particularly urgent one – not optimism. It’s going to be really hard to be a Christian in this country really soon. So, we are not missionaries of optimism. We are missionaries of hope.”

Despite the problems that face Catholics within the Church, in society and the political arena, Father Riccardo reminded those assembled that there is no reason to be afraid because Jesus Christ is in command.

At the same time, he said, that doesn’t mean that the faithful should walk blindly and ignore what’s going on in the world.

“The Church, in an apostolic time like ours, needs to have the same confidence and power and goodness of the message She bears in its life-changing potency, in Her power of regeneration and growth.

“In a particular way, those in positions of influence and authority – that would be us – need to be convinced that Christ is the answer to every human ill, the solution to every human problem, the only hope for a dying race.

“They need to be convinced of the bad news: That the human race has by its own rebellion brought a curse upon itself and has sold itself into slavery to the prince of darkness, and there is nothing we can do under our own power to save ourselves.”

On the flip side, being guided by the Good News of Christ and His mercy will not only set individuals free from the bonds of slavery to the devil but the world as well. Obedience to the Gospel is perfect freedom, he emphasized.

“When we come to hear the Gospel, when we are moved to surrender ourselves to Jesus in faith, when we come to know the Gospel as explosive, extraordinary, life-changing news, then suddenly you and I are filled with hope in the sense that, no matter what’s going on around us, we can say, ‘I’m immovable; I’m united to Him,’” Father Riccardo said.

“We have this as a sure and steadfast anchor of the soul. That’s what hope is. Hope is an anchor. And how do anchors work? They lodge into something solid. It is not wishful thinking. … Hope lodges into the foot of the cross. That’s where our hope is rooted. …

“Jesus just looks at us and, by name, speaks to us: ‘Why are you afraid? I have no rival. And I’m with you in the boat.’”

Please click here to read a letter written by Father John Riccardo to the Knights and Dames of the Order of Malta.